Introduction to Acts of the Apostles

Acts of the Apostles is the one historical book of the New Testament, and much of what we know about the early years of Christianity comes from this book. It is mainly about two of the apostles - Peter and Paul. Peter was one of Jesus' original twelve apostles. Paul was not one of the original apostles, but he later adopted that title for himself.

Many familiar and dramatic events are told in Acts - Jesus' ascension to heaven, Paul's conversion, Paul's escape from Damascus, Peter's escape from prison, Paul's three missionary journeys, Paul's arrest, and the shipwreck on the way to Rome, to name a few.

The adventures of Peter and Paul, as they traveled and spread the message of Jesus, form an exciting tale. The table below lists some of the important events of the Acts story and their approximate dates.

Approximately half of the book of Acts tells about Paul's missionary journeys and his final journey to Rome as a prisoner. The "we" language in some sections tells us that the author of Acts was with Paul on those journeys and had firsthand knowledge of the events he records. The map below, based on the narrative in Acts, shows the routes of Paul's journeys. 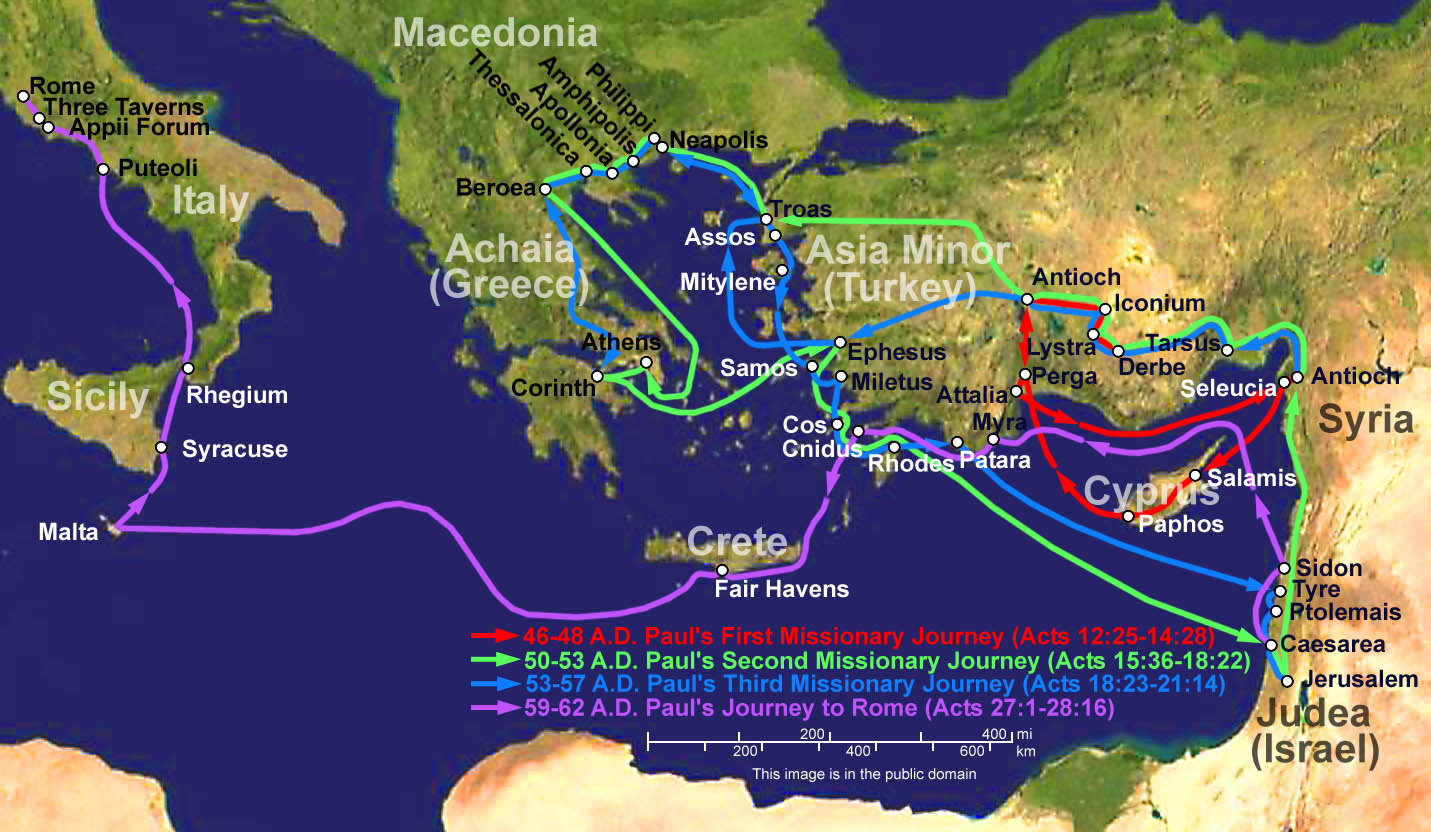 Acts is a sequel to the Gospel of Luke, written by the same author. Even though the Gospel of Luke and Acts are both anonymous, they are both addressed to Theophilus (Luke 1:1-4, Acts 1:1-2). The title, "most excellent" indicates Theophilus was probably a Roman of high rank, but nothing else is known about him, and he is not mentioned anywhere else in the Bible. There are also great similarities in the theology, writing style and vocabulary of the two books.

Luke, a companion of Paul (Philemon 1:24) and a physician (Colossians 4:14), is traditionally believed to be the author of both books. This seems to be a good fit because someone who had traveled with Paul would know all the details of Paul's journeys that are told in Acts. Also, both books show an interest in medical matters that would be characteristic of a physician (Luke 8:43-44, Acts 28:3-6, 28:8). However, there is no way to be sure Luke was the author.

Acts ends abruptly with the imprisonment of Paul in Rome, which occurred around 62 A.D., so it is natural to assume it was written shortly after that. However, for a variety of reasons, many scholars believe it was written as much as 30 years later. The most common estimates are that Luke and Acts were written between 80 and 90 A.D., but the exact date remains a mystery.

Acts is a book of history, but it is also a book of theology. It interprets the words, actions, life, death and resurrection of Jesus, and it forms the basis of much of what Christians believe.

At the time Jesus was crucified, His disciples and followers were nearly all Jews. Acts tells how God's covenant with the Jews is now expanded to include all people of the world. The Christian leaders decided that the Gentiles who converted to Christianity did not have to observe the Jewish traditions about circumcision, diet, Sabbath observance, etc. This opened the way for large numbers of non-Jews to become Christians. As more and more Gentiles converted, Christianity lost its uniquely Jewish character and emerged as a separate religion.

Each lesson in this series of Bible studies has a reading assignment and a number of thought-provoking questions to be answered by the reader. The questions are intended to help us think about what the Bible passages really mean and how they apply to our lives, and to lead us to a deeper, more mature faith.

We also supply answers for some of the questions. However, for maximum personal benefit, you should answer all the questions yourself before looking at our answers. Our answers are given from a mainstream Christian and historical viewpoint. We use the best reference materials available to present the Bible as it was understood by the original audience in Biblical times. But God calls different people in different ways, and there is no single "right" answer for many of the questions; your answers may well be different from ours.

The Bible Studies are nonsectarian, and are suitable for use by all Christians. The vast majority of Bible passages are interpreted the same way by all mainstream Christian denominations. A few passages are controversial, and we will sometimes point out and explain the denominational differences.